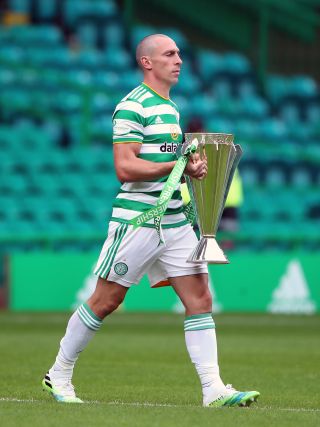 The Scottish Premiership is back after an absence of nearly five months.

Five games took place across the weekend as the new season kicked off following a lengthy break amid the coronavirus lockdown.

Here are five things we learned from the action.

Odsonne Edouard showed his class again with a hat-trick in the 5-1 win against Hamilton to send out a warning to title rivals. If Rangers’ 1-0 win at Aberdeen on Saturday had put the Hoops under pressure in their bid for a 10th successive title it did not show. The French striker tapped in a cross from Greg Taylor before right-back Jeremie Frimpong  doubled the home side’s lead. Accies midfielder Scott Martin reduced the deficit with a deflected strike but Edouard  pounced twice early in the second-half – with substiute Patryk Klimala adding a late fifth – as Celtic cruised to their first win of what could be an historic campaign.

Two Aberdeen supporters beat the spectator ban by getting themselves up in a cherry-picker and looking down on Pittodrie as the Dons hosted Rangers. The fans managed a song as the game kicked off but they were brought back down to earth as Ryan Kent’s goal gave Rangers the points.

Rangers have unearthed a solid addition to their back line

Leon Balogun did not lose a challenge in the air or on the deck as the 32-year-old enjoyed an impressive debut. The former Mainz defender arrived from Brighton via a loan spell at Wigan, where he lost just once in 11 appearances. With the Dons missing injured strikers Sam Cosgrove and Curtis Main, there may be bigger challenges ahead though.

Dundee United have lessons to learn

Manager Micky Mellon admitted they need to adjust to the top flight quickly after they let slip a lead in a 1-1 draw against 10-man St Johnstone.  Lawrence Shankland passed up some chances to double their half-time lead as he found out he might not get so much time and space against Premiership defences.

Jake Eastwood had a stark introduction to Scottish football

🔥 A @MartinBoyle9 brace got us up and running for the new season in style as The Hibees edged out Kilmarnock 2-1 at Easter Road.— Hibernian FC (@HibernianFC) August 2, 2020

The Kilmarnock goalkeeper raced well out of his box and was beaten by Martin Boyle to concede a soft goal on his debut after signing on loan from Sheffiield United. The 23-year-old lost another goal to Boyle before failing to reappear for the second half, although manage Alex Dyer confirmed he had a quad injury and would remain his number one after Danny Rogers kept a clean sheet in a 2-1 defeat.