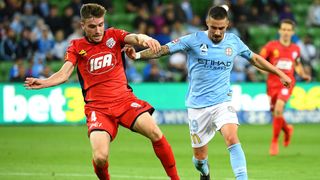 Jamie Maclaren marked his Melbourne City debut with a goal as they battled to a 1-1 draw at home to Adelaide United on Saturday.

The striker, who was playing his first A-League match since April 2017 after joining City last month, rescued a point for the home side in a competitive clash at AAMI Park.

The result means Adelaide, who sit fourth, remain two points above City in the table.

Tarek Elrich opened the scoring on the stroke of half-time, his cross eluding everyone in the box and goalkeeper Ben Kennedy before finding the right-hand corner of the net.

Jaushua Sotirio rolled the ball past Kennedy after being sent through by Roly Bonevacia to settle the match 13 minutes from time and earn the Wanderers only their third win of the season.