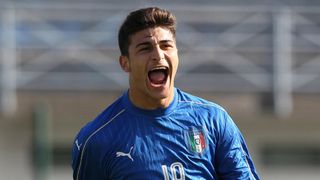 Galliani feels the 19-year-old, who plays in Serie B, fits the profile of young Italian talent Milan are looking to build from and suggested he could initially serve as a back-up option for Suso.

He has played in all 19 of Ascoli's league matches this season.

"He is a good player, a left-footer who plays on the right and he could be a good alternative to Suso.

"He still has a long way to go, but the Berlusconi-Galliani agreement is to focus on young Italian players."

However, Galliani stressed Milan would not be splashing the cash in January, especially because deals need to be run past Sino-Europe, who have completed the preliminary stage of their takeover.

"I can definitely exclude big signings as Milan's transfer campaign is very complex.

"Everything is difficult. I can make a deal, conclude it, but then we need the approval of the other party [Sino].

"The market moves quickly, never mind having a complete deal and having to ask permission from others.

"To have a neutral transfer campaign we will have to sell before we buy. So I don't know what will happen in January."