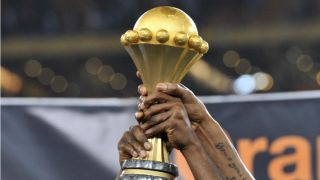 Zimbabwe edged closer to qualifying for their first Africa Cup of Nations since 2006 with a 4-0 win over Swaziland that sent them three points clear at the top of Group L.

The two teams went into Monday's fixture tied on five points following a 1-1 draw in Lobamba on Friday, but four second-half goals put Zimbabwe firmly in the box seat in Harare.

Knowledge Musona opened the scoring from the penalty spot in the 53rd minute, before Costa Nhamoinesu headed in a second.

Substitutes Evans Rusike and Khama Billiat gave the result further gloss late on, all after Swaziland had seen a goal disallowed for offside in the first half.

Malawi and Guinea have the chance to pull level on points with Swaziland when they meet in Blantyre on Tuesday.

Libya beat Sao Tome and Principe 4-0 in Egypt to register their first win in Group F - Mohamed Zubya hitting a hat-trick before being sent off three minutes from time.

In Group C, Mali reclaimed top spot from Benin with a 1-0 win at Equatorial Guinea, with Mustapha Yatabare netting the winner in the 89th minute.

Last year's AFCON hosts become the first nation to be eliminated from the qualifying process.

In the day's remaining fixture, Central African Republic came from behind to win 2-1 against Madagascar and go top of Group B.