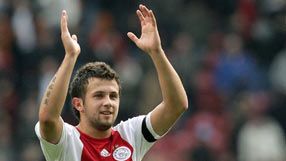 PSV Eindhoven remain on top with 34 points from 16 matches after Friday's 4-2 defeat at NAC Breda.

They lead on goal difference ahead of Twente Enschede who beat NEC Nijmegen 4-2 on Saturday. Ajax climbed to third on 31.

Struggling Feyenoord came from behind to beat ADO Den Haag 2-1 and climb out of the relegation zone to 15th with 16 points.

Dmitry Bulykin struck from close range on the stroke of half-time to put ADO ahead but directly after the break an own goal by Aleksander Radosavljevic levelled the score.

Karim El Ahmadi set up 18-year-old Luc Castaignos just before the hour to score his fifth goal of the season and secure Feyenoord's fourth win.