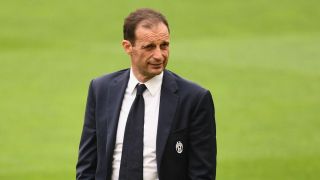 Massimiliano Allegri is loving life at Juventus and is keen to open talks over a new contract after the Champions League final against Real Madrid.

The 49-year-old's existing deal is due to expire in June 2018 and Arsenal are believed to be keeping a close eye on Allegri's situation in Turin.

Nevertheless, the Juve coach seems to prefer a prolonged stay in Turin over a potential move to the Premier League.

"I want to stay at Juventus," Allegri said at a news conference ahead of Saturday's trip to Bologna for their final Serie A outing.

"I have a contract until 2018 and need to talk to the club after the Champions League final.

"I am proud of what we have achieved during my three years here.

"Hopefully we can add another trophy in Cardiff."

Allegri took charge of Juve in 2014 and has since guided them to three consecutive domestic doubles, extending the club's run of successive Scudetti to an unprecedented six.

He led the Bianconeri to the Champions League final in his first season, where Barcelona proved to be too strong.

Juve will be looking to make amends for that loss when they meet Madrid in their second final in three years on June 3.