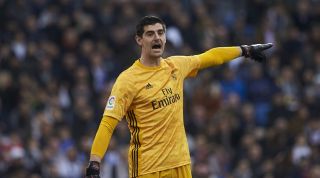 Chelsea bought Courtois in 2011 and sent him on loan to Atletico Madrid for three seasons, during which time Barcelona tried to tempt Real Madrid's current No.1 to the Camp Nou.

And Morata, a former Madrid player who currently represents Atletico, was supposedly a target for Barcelona before he moved to the Wanda Metropolitano from Chelsea in January 2019.

“There was insistent talk of signing Courtois, but they finally brought in [Marc-Andre] ter Stegen at the discretion of [former director of football, Andoni] Zubizarreta,” Mestre told Mundo Deportivo.

“Following the opinion of the players, bringing Morata would have created a possible conflict in the locker room. He would have liked to play and not be a substitute.

“There were two issues with Morata - one concerned controlling the club's budget which Pep Segura was in charge of and he was always extremely careful about not going over budget.

“Then there was the sporting side - Morata was an international and, therefore, not the kind of player who should be sat on the bench in every game.

“He didn't want to be a substitute and the atmosphere within the squad was very good - if he had joined, it would have unsettled that but, as I say, it's not the players who make those decisions.”

Mestre left the Camp Nou last summer, having served on the club's board for five years.

And the former vice-president says he was not on the same page as many of the other decision-makers at Barcelona.

"I felt I'd been fighting an uphill battle for some time,” he added.

“I had different ideas about things to other board members but it wasn't important. I realised that I was the only one who thought in a certain way.

“The football committee which comprised Josep Maria Bartomeu, Javier Bordas, Silvio Elias, and Xavier Vilajoana were not in agreement with me or with Pep Segura in his role as general manager. I was the only one who defended him and I felt alone."