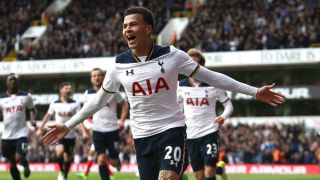 Tottenham star Dele Alli says he does not want to give much thought to the idea of a long-term future at the club.

The 21-year-old has been a revelation at White Hart Lane since signing from MK Dons in 2015 and has won back-to-back PFA Young Player of the Year awards for his Premier League performances.

The England international has seen his name linked with a big-money move at the end of the season, with Real Madrid among the teams credited with an interest.

Alli suggested that he could consider spending the rest of his career with Spurs but accepts that "anything can happen" in his future.

"It's important you enjoy the journey, whether I end up at Tottenham for the next 15 years and retire here," he told Sky Sports. "I think it's important for me not to get too carried away by what will happen in the future.

"The way football is, anything can happen at any time. I will enjoy my time here now; who knows what will happen in the future."

Alli has thrived under the guidance of Spurs boss Mauricio Pochettino and the attacking midfielder says the Argentine commands huge respect from within the squad.

"He's a very passionate guy, an unbelievable manager," he said. "Nobody in our team would say a bad word about him. His door is always open, not just for football either. He is a father figure to the players.

"The thing people respect him most for, no matter who you are, he's not afraid to drop anyone. If you take your foot off the gas or have a bad attitude, he will let you know straight away. You have to work hard to be a part of his team."

Can't wait to run out on this pitch for one more time, been an honour to be a Spurs player at the lane May 13, 2017

Spurs face Manchester United on Sunday in their last match at White Hart Lane before it is demolished to make way for their new stadium, which is due to be opened for the 2018-19 season.

A second title challenge in two years has ended in disappointment for Pochettino's side, with their defeat to West Ham last week and Chelsea's 1-0 win over West Brom on Friday ensuring that the Blues are the new champions.

"It's a strange one," Alli said of the season. "It's disappointing but at the same time we can't forget how well we've done as a team. We have definitely improved on last year but after the game against West Ham, everything before gets forgotten.

"It's important we don't forget about what happened and how far we've come.

"We did really well to get [the gap] down, at one point I think Chelsea were 14 points away from us, and we took it down to four points. It was one of the worst atmospheres I've been in after the game [West Ham] in the changing room, everyone was so disappointed.

"As individuals and as a team, we've learned our lesson from last season, being in the title race and not even finishing second was a hard one to take. We just have to make sure we finish this season strongly."