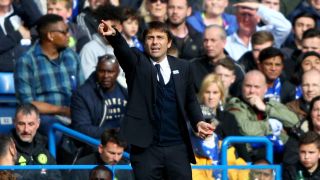 Antonio Conte acknowledges Chelsea's 3-0 loss away at Arsenal last September turned out to be a blessing in disguise for the Premier League champions.

However, Conte - who comes up against Arsenal again on Sunday, nearly a year on from that fateful trip to Emirates Stadium - used the setback to implement a change that proved to be the turning point in the club's fortunes.

The Italian coach switched to a 3-4-3 formation at half time and although it didn't change the outcome against Arsenal, Chelsea won their next 13 league games on the spin on their way to claiming the title.

"I remember that game very well because it was a really bad game for us," Conte told a news conference.

"Then, we changed our system because after that game I understood very well our team. We had no balance. In that game, they dominated us from the start until the end. I think this wasn't the right way for us.

"But I think after that game we changed a lot of things and then we won the league."

Conte says Hazard is improving and 'is very close to being totally fit'. He reiterates he has to make the best decision for the team. September 15, 2017

While Conte was afforded the opportunity to turn things around after a tricky start to life at Stamford Bridge, Frank de Boer lost his job at Crystal Palace after just four league games in charge.

"It's always a pity when another coach is sacked," Conte said

"In the human aspect, I'm very close to Frank for this bad situation. Every coach hopes to have time to work and to try to transfer your idea, your method to your players. Sometimes you have this time, sometimes you haven't this time.

"This is our job. We must be prepared to face this situation. For this reason, we must have great patience.

"Our job is difficult. Every day you have to think, you have to work very hard to try to have a good result. When the result is not good, anything can happen. We must be prepared for this."