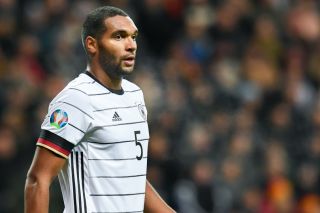 Despite Sunday’s 4-0 win over Newcastle United, Arsenal are still down in tenth, seven points off the top four.

Mikel Arteta has managed to steady the ship after a disastrous start to the season under Unai Emery, but much improvement is needed to establish the club in the Champions League places once more.

A fragile defence, which has often been too rash or tentative, is one area that needs to be strengthened if Arsenal are to challenge again, and the club have been linked with a move for Bayer Leverkusen’s Jonathan Tah.

The 24-year-old centre back made his debut for Germany in 2016, and although he missed out on a place in Joachim Low’s last World Cup squad, he has recently returned to the national team set-up, winning nine caps in total.

Goalkeeper Bernd Leno will be familiar with Tah as they played together for three seasons at Leverkusen, finishing as high as third.

Tah’s contract, which runs until 2023, contains a £33.25million release clause which Arsenal are keen to activate according to German newspaper Bild.

However, the Gunners would need to act soon to take advantage of this release clause as it is believed to expire in June.

Following injuries to Rob Holding and Calum Chambers, who looks set to be out for several months, David Luiz and Shkodran Mustafi have become Arteta’s default central defensive partnership.

They performed well to secure a clean sheet away to Olympiacos last night in the first leg of their Europa League round of 32 tie, but the desire for reinforcements remains as strong as ever.

Pablo Mari joined on loan from Flamengo until the end of the season, with an option to make the deal permanent, while 18-year-old William Saliba will link up with his new club in the summer having returned on loan to Saint-Etienne in order to gain more experience.