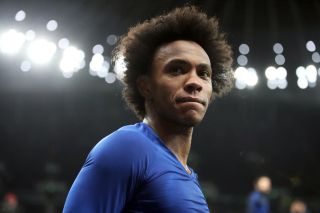 Willian is yet to agree a contract extension at Chelsea and is free to negotiate with potential suitors as he has less than six months left on his contract.

With the Brazilian's current deal expiring in June, he could be set to sign for another club on a free transfer come summer.

This season, the 31-year-old has been used by Frank Lampard as a more experienced option in and amongst a squad full of young players.

But, despite still being a useful option, it seems Chelsea are unwilling to meet Willian's reported demand for a three-year extension.

According to the Telegraph, Arsenal and Spurs are interested in making Willian an offer to take him across the English capital.

Arsenal could be given a helping hand by Kia Joorbichan, the agent who brokered David Luiz's move from Chelsea.

Joorbichan, who is himself an Arsenal fan, is the owner of the agency that handles Willian's affairs and may be influential in any deal.

Mourinho was at loggerheads with club vice-chairman Ed Woodward at the time, which led to his sacking before any deal could be agreed.

The Portuguese manager is reported to have retained an interest in Willian and would be happy to see him arrive at Spurs.

The Tottenham faithful would take some convincing, however, after Willian famously rejected the club at the last minute in favour of rivals Chelsea when he first moved to England.

Both Arsenal and Spurs may face stern competition from Bundesliga big-hitters Bayern Munich who are also believed to be monitoring Willian's situation.

Although, it is thought that Willian and his family are very settled in London and may prefer to stay in the city.