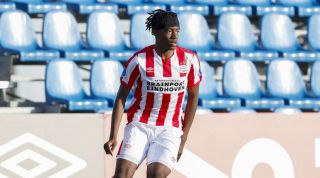 Madueke joined the Dutch outfit as a youngster in 2018 and has climbed through the ranks in Eindhoven.

The 17-year-old is beginning to assert himself in the Eredivisie - he made his first start for the senior team against VVV Venlo.

Since then, Madueke has been an unused substitute on the PSV bench for the last two games.

This comes after scoring seven and assisting eight in just 11 games for in the under-19 Eredivise.

The young midfielder started life in Crystal Palace's youth set-up as a kid, then had a spell Tottenham Hotspur's academy, before joining PSV.

Madueke has 18 months left on his current contract and clubs from around Europe are weighing up a moves sooner rather than later, when his value could soar.

Arsenal and Wolves have expressed an interest in the player and are keeping close tabs on his progress, according to the Daily Mail.

The Premier League duo are reportedly joined by RB Leipzig and Valencia in the hunt for the England prodigy.

Madueke has featured for England's Young Lions at under-18 level but believes his move abroad is the key to his future success.

"There have been so many talented English players that have been stuck around 23s squads," he said.

"People are now starting to realise that if they want to play and they're good enough then why not go abroad if the opportunity is there?"

"I looked at the young players that have moved like Jadon Sancho, Reiss Nelson on loan [to Hoffenheim from Arsenal]."

5 things you should know about new Arsenal signing Pablo Mari