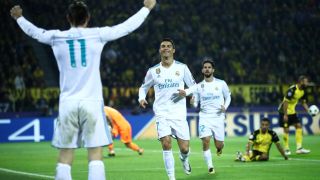 Real Madrid coach Zinedine Zidane lauded Gareth Bale for his display against Borussia Dortmund, saying he was delighted for the attacker after a difficult period.

Bale scored a stunning volley before Cristiano Ronaldo struck a brace to see Madrid to a 3-1 victory in the Champions League on Tuesday.

Wales international Bale has been whistled at and booed by his own fans this season, but has started to find form.

Zidane was thrilled for the 28-year-old, while he played down any concerns over Bale's calf injury.

"I hope that there are more turning points like tonight's, but Gareth is now on really good form. His calf has swelled up but it's nothing major," the Frenchman said.

"He hasn't had it easy and I'm delighted for him. Getting a goal like that is fantastic for him.

"This game will have done wonders for him and if you give him the space he's lethal, he's just so good."

When you strike the ball on the volley perfectly.September 26, 2017

The win was Madrid's second straight since their shock 1-0 LaLiga loss to Real Betis and eased the pressure on Zidane's men, who are seven points behind rivals and leaders Barcelona domestically.

Zidane was glad to see his team come away with another three points in Group H.

"The important thing is that we perform well and score goals. I'm delighted for Bale and Cristiano Ronaldo. They read the game really well," he said.

"Ultimately we come away with a very good result at what's a tough place to come to.

"We had never won here before and this is a significant result. We put in a really good performance from start to finish."