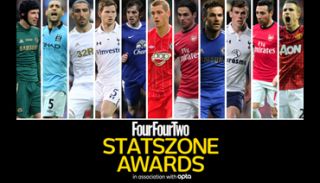 The 23-year-old racked up 21 goals and four assists in 33 Premier League matches. He had more shots on target than any other player in England’s top flight (73) and attempted the fourth most dribbles (154).

Bale was also named Attacking Midfielder of the Year ahead of Chelsea's Juan Mata and Arsenal's Santi Cazorla.

Stats Zone, the multiple award-winning free app from FourFourTwo powered by Opta statistics, is designed to help you win your argument by proving your point. And as it's awards season, we thought we'd prove our own point – by naming the best player in each position, with the stats to justify it.

Based upon intelligent interpretation of the wealth of facts available, the awards were judged by a five-man panel from FourFourTwo and Opta's editorial teams, men with far more years of stats-based analysis and stands-based suffering than they would care to admit.

What are the Stats Zone Awards?