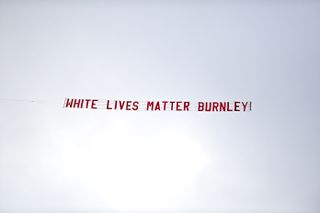 Professional Footballers’ Association equalities officer Iffy Onuora hopes the offensive banner flown over the Etihad Stadium on Monday night will act as a catalyst for further conversations about the Black Lives Matter movement.

A plane flew above the ground trailing the words ‘White lives matter Burnley’ just after kick-off between Manchester City and the Clarets.

It occurred just moments after all players had taken a knee in support of the Black Lives Matter movement.

Burnley issued a strong statement condemning the banner during half-time, and captain Ben Mee spoke passionately about the incident after the match.

Former Huddersfield and Gillingham striker Onuora told BBC Breakfast: “The words themselves aren’t offensive, it’s just the context. It’s the rejection of the conversation we’re having at the moment. That’s what it represents.

“I guess people have the right to do it. For me it’s just proof again that these things can lead to positive things because all that’s been said in the 12 hours since the game finished has been, again, a catalyst, another conversation to have.

“I think the good thing is that we are at such a transformative point now in the year and in football, all that’s gone on, that this just expands it again and hopefully leads to more conversations.

“For everyone out there these are uncomfortable conversations and we’ve got to have them. There’s nothing wrong with doing that, being comfortable with being uncomfortable.”

Mee told BBC Radio 5 Live after the game: “We as a group of players condemn it, we’re ashamed, we’re embarrassed.

“It definitely had a massive impact on us to see that in the sky. We were embarrassed, disappointed, upset. We are embarrassed that our name was in it.

“That they tried to attach it to our club – it doesn’t belong anywhere near our club. Fans like that don’t deserve to be around football.”

As an ex ⁦@BurnleyOfficial⁩ captain, I feel I need to show my disappointment when I saw that sign above the stadium at a club many black players have represented, please understand the message #BlackLivesMatters is for the good of humanity not just Black lives. 🖤🤍 pic.twitter.com/s3QBpwVDTI— Frank Sinclair (@FrankMSinclair) June 22, 2020

Burnley said the perpetrators would be banned for life if identified.

“We wish to make it clear that those responsible are not welcome at Turf Moor,” their statement read.

“This, in no way, represents what Burnley Football Club stands for and we will work fully with the authorities to identify those responsible and issue lifetime bans.”

Fare, which works with both UEFA and FIFA on inclusion and equality issues, offered a stark assessment, placing it as the latest in a series of distasteful acts across the continent.

“The racist backlash against the Black Lives Matter movement across Europe is a trend we have seen and documented,” Fare’s executive director Piara Powar told the PA news agency.

“Set against the BLM message of equal rights, ‘White Lives Matter’ can only be motivated by racism and a denial of equal rights. It shows exactly why the fight for equality is so important and why the majority of people have supported it.

“The movement, the issues that are being discussed and the change that will arise is unstoppable. History will judge that this was a moment that led to change.”

We are aware of the incident that occurred tonight before the game! Ourselves and @BurnleyOfficial are aware of it and will be fully investigating!! Thank you for all the tweets and reports!! #UTC#twitterclarets— Burnley FC Police (@BurnleyFCPolice) June 22, 2020

Kick It Out, English football’s anti-racism charity, told PA the sentiments of the banner represented a grave misunderstanding of the BLM initiative.

“The point of Black Lives Matter is not to diminish the importance of other people’s lives,” said the organisation’s chair Sanjay Bhandari.

“It is to highlight that black people are being denied certain human rights simply by virtue of the colour of their skin. It is about equality. We shall continue to support the Black Lives Matter movement and the fight for greater equality for all in football.”

In a statement, he said:  “We are making enquiries to establish the full circumstances surrounding this incident and we will then be in a position to make an assessment as to whether any criminal offences have taken place.

“We recognise that this banner will have caused offence to many people in Lancashire and beyond and we continue to liaise closely with our partners at both the club and in the local authority.”

As a player of BAME origin, I find Darren Bent’s comments tonight completely disrespectful, especially to my father, who is black and who has been a huge influence in my life and helped make me the person I am proud to be. https://t.co/hp1tTGhy2j— Dwight McNeil (@dwight_mcneil99) June 22, 2020

Former Premier League striker Darren Bent posted on Twitter in reply to the plane image to say: “Strange considering Burnley have NO black players in their squad at all.”

That comment did not sit well with current Claret Dwight McNeil, who replied: “As a player of BAME origin, I find Darren Bent’s comments tonight completely disrespectful, especially to my father, who is black and who has been a huge influence in my life and helped make me the person I am proud to be.”

Burnley never got going after the plane fly-past incident. The visitors, already weakened by injuries and contractual issues, were outplayed by a far superior City side and were beaten 5-0.