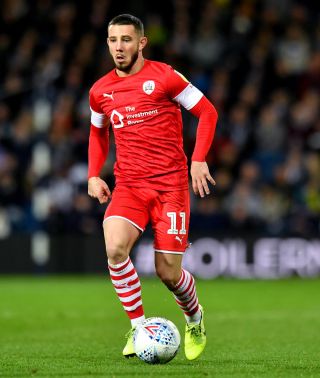 Struggling Barnsley followed up their impressive victory at Fulham last week with a 1-0 win against Middlesbrough.

Conor Chaplin’s second-half have Gerhard Struber’s side a valuable three points against a Middlesbrough side hovering just above the relegation zone. The result means that Boro are now without a win in their last ten games in all competitions.

Struber made one change with Clarke Oduor taking over from Luke Thomas.

Boro boss Jonathan Woodgate made four changes with Ryan Shotton returning after a long injury lay-off. Marvin Johnson also received a recall and there were places in attack for Ravel Morrison and Britt Assombalonga.

Lewis Wing threatened early on with a shot from inside the area which was blocked by Aapo Halme.

Wing fired wide from around 25 yards out.

Wing posed another threat early in the second half with a free-kick which was deflected wide off the defensive wall.

Shotton did well to head away as Chaplin waited to pounce.

Mowatt shot over from just inside the area while Cauley Woodrow missed the target with an effort from distance.

Woodrow then put a shot on target from inside the ‘D’, but it was straight at Pears who gathered the ball comfortably.

Woodgate made a change in attack, sending Rudy Gestete on in place of Assombalonga.

Chaplin (73) scored at the second attempt, firing into the net after his shot on the turn inside the area saw the ball come back off the bar.

Woodgate made another substitution in a bid to spark his team into life, with Hayden Coulson taking over from Morrison.

Chaplin left the field with Thomas taking his place.

Boro failed to pose a serious threat in the closing stages while Barnsley appeared content to see out the match, rarely venturing forward.

The visiting fans made their feelings clear as the manager and players made their way towards the tunnel, with chants of “you’re not fit to wear the shirt” echoing around the stadium.