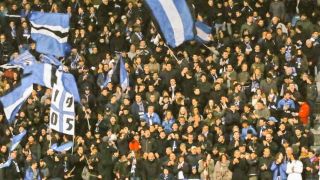 Lyon's Ligue 1 match at Bastia was delayed by almost an hour after a section of the hosts' support stormed the pitch in an apparent attempt to attack the visiting players.

Bruno Genesio's squad were completing their pre-match warm-up when a section of Bastia's supporters made their way onto the Stade Armand-Cesari pitch and confronted Lyon's players in troubling scenes.

Lyon's players were ushered down the tunnel as stewards held back the pitch invaders, causing a lengthy delay to kick-off.

It is the second time in the space of three days that a Lyon game has been delayed after Thursday's Europa League clash with Besiktas was put back following crowd disturbances at Stade Olympique Lyonnais.

"Bastia fans kicked balls into [goalkeeper] Mathieu Gorgelin's goal. He and Memphis [Depay] tried to move them out of the way before being attacked by many fans," Lyon defender Jeremy Berthod told OL TV.

"The players then huddled together. The moment it happened, none of us wanted to come out of the dressing room and play this match."