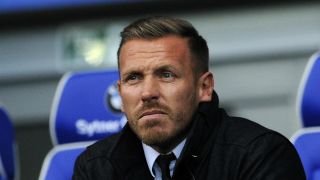 Craig Bellamy has stepped down as a youth coach at Cardiff City to fight accusations of bullying.

The former Wales striker, who played for teams including Liverpool before ending his career with Cardiff, is accused of mistreating a youth player who then left the club.

Bellamy denies the allegations "categorically" but said he will temporarily step down from his post as he battles to clear his name.

"I am aware of allegations that have been made against me via the media," Bellamy said in a statement.

"I understand the need for Cardiff City to undertake a full investigation in response to these allegations and – at my own suggestion – I have temporarily removed myself from my coaching position in order to cooperate fully with the club's inquiry.

"Obviously, I am saddened both by the allegations and the manner in which they were made and I categorically refute them.

"I fully expect to return to my coaching role and have sought legal advice as to my position. I will be making no further comment until the full investigation by the club has concluded."

"Ken Choo, the chief executive, is dealing with this," he told reporters. "It's not in my remit. I don't know anything about it."