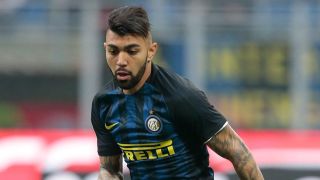 Benfica have signed Gabriel Barbosa on a season-long loan from Inter with an option to buy while offloading Greece striker Kostas Mitroglou to Marseille in a deal reportedly worth €15million.

Gabriel joined Inter last August for a fee in the region of €25million but endured a poor first season at San Siro as he made just nine Serie A appearances and scored only one goal.

But the Brazil forward has been handed an escape by Benfica, who will look to have the 21-year-old play a role in their bid for a fifth consecutive Primeira Liga title.

Leaving Estadio da Luz, though, is Mitroglou, who links up with a Marseille team looking to improve on last season's fifth-placed finish in Ligue 1 under Rudi Garcia.

Marseille have taken seven points from their opening four games this season and should benefit from Mitroglou's prowess.