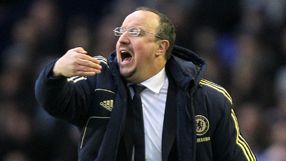 Leading 2-0 with three minutes remaining, the London club allowed Adam Le Fondre to score twice for relegation-threatened Reading to leave Benitez and opposite number Brian McDermott at a loss to analyse what happened.

"It's difficult to explain, we were controlling the game for 85 minutes," Benitez told the Chelsea website.

"It's not about blaming anyone but we need to analyse why we didn't kill the game and why we made the mistakes, and then work on the training pitch," added the Spaniard, in charge at the London club on an interim basis until the end of the season.

Chelsea have a four-point advantage over fourth-placed Tottenham Hotspur but are 13 points behind United with 14 league matches remaining.

The Londoners were dumped out of the Champions League in the group stages, were humbled in the League Cup semi-final against Swansea City and salvaged a late draw against third tier Brentford in the FA Cup on Sunday.

McDermott, whose side climbed out of the bottom three to 17th to be level on 20 points with 19th-placed Aston Villa and Wigan Athletic in 18th, had not foreseen the late collapse.

"I didn't see a vulnerability in Chelsea," the Reading boss said.

"I saw a side with [Frank] Lampard, [Juan] Mata and world-class players all over the pitch, but we've just got a draw against the champions of Europe."

Benitez's troubles were compounded with the news that Spaniard Mata, who scored Chelsea's opener on the stroke of half-time and then set up Lampard's second-half header, is an injury concern.

"He has a problem with his ankle, he needs to see the doctor but we will assess him tomorrow," Benitez added.