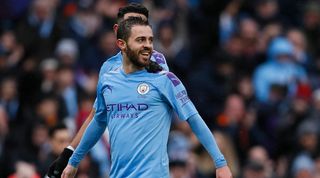 Bernardo Silva says he would love to play alongside Lionel Messi, but doesn't know whether that would be at Manchester City or Barcelona.

Already counting Cristiano Ronaldo as an international teammate with Portugal, Silva wants to play with the other player he thinks is the greatest in history.

"I play with Cristiano in the National Team and if I played with Messi, being able to say that I played with the two best in history would be a pleasure," the midfielder told Cadena Ser.

"But it is a complicated matter - with City or in Barça?"

Silva is currently getting ready to take on Ronaldo's former side, Real Madrid, with City in the Champions League last 16.

The first leg will be played at the Estadio Santiago Bernabeu on Wednesday, before the return fixture at the Etihad Stadium on March 17.

Silva says that Man City are keen to add the trophy to their list of achievements, with it being the only one available the club are yet to win.

It is especially important this season with Liverpool set to triumph in the Premier League ahead of them.

"They are having a great season. They have already won the Premier League," Silva continued. "They are one of the best teams in the world.

"I think we should have fought harder because the distance is too great for the quality of both teams."