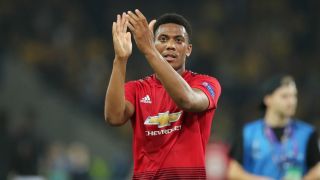 Tired of your mates recycling the same old football trivia questions from years gone by?

Bring them bang up-to-date and get them guessing with our Opta-powered Premier League quiz.

All the answers are at the bottom of the page, so you can claim the high ground when it comes to statistical knowledge!

1. Anthony Martial has scored in his last five Premier League games for Manchester United and could become just the fourth player to score in six consecutive appearances when the Red Devils face Crystal Palace. Who are the other three?

2. West Ham have lost all three of their meetings with Manchester City at the London Stadium in all competitions, scoring just once. How many have they conceded across those games?

3. A win or draw at Watford will see Liverpool remain unbeaten in their opening 13 matches of the Premier League season. When was the last time the Reds achieved such a feat?

4. Ahead of their clash with Wolves, Huddersfield Town's Steve Mounie has had more shots without scoring than any other Premier League player this season. How many?

Steve Mounié speaks to the press ahead of ’s game against (AT) November 22, 2018

5. Newcastle United visit Burnley on Monday, but the Magpies' Premier League games this season have seen the fewest total goals. How many?