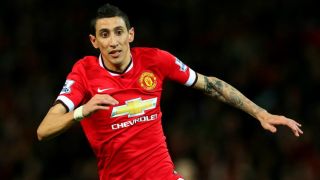 Laurent Blanc has confirmed that Paris Saint-Germain are closing in on a deal to sign Manchester United forward Angel di Maria.

Speculation has mounted in recent weeks that Di Maria is on his way to the French capital after an underwhelming season in the Premier League following his British-record transfer to Old Trafford from Real Madrid last August.

The Argentinian did not board his flight to join United on their pre-season tour of the United States at the weekend and, speaking ahead of PSG's International Champions Cup match against Louis van Gaal's side on Wednesday, Blanc was upbeat about the Ligue 1 champions' chances of luring him to France.

"Regarding Angel di Maria, the case is close to being completed," the PSG coach said at a media conference on Monday.

"I am quite positive on this case."

Blanc also indicated that Di Maria's expected arrival will not herald the end of PSG's transfer business, as he looks to freshen up a squad that won a domestic treble last season.

"We expect departures also in our group," he added. "We want to regenerate the group."