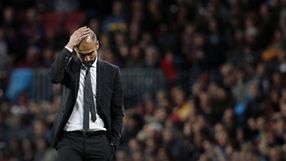 The 41-year-old former Barca and Spain midfielder has inspired the Catalan club to an impressive 13 trophies since he took charge in 2008, including three straight Spanish league titles and Champions League triumphs in 2009 and 2011.

However, elimination from Europe's elite club competition would be a fresh blow following Saturday's 2-1 La Liga reverse at home to Real Madrid which put their bitter Spanish rivals seven points clear at the top with four games left.

Real could get another crack at Barca in next month's Champions League final if they manage to get past Bayern Munich, who are seeking to protect a 2-1 lead from last week's first leg when they play at the Bernabeu on Wednesday.

Guardiola suffered the rare embarrassment of having to explain why his tactics failed against Real after he left Cesc Fabregas, Alexis Sanchez and Pedro out of his starting lineup and gambled on 20-year-old B-team winger Cristian Tello.

The pacy Tello showed flashes of promise but wasted one of Barca's best chances with a wild effort, while Sanchez scored immediately after coming off the bench.

Fabregas had scant opportunity to demonstrate the creativity and eye for goal that Barca paid Arsenal 40 million euros for when he replaced Tello with only 10 minutes left.

"If I had left other players out you would probably be asking me now why I did not include them," a defensive Guardiola told a post-match news conference.

"Maybe I did get it wrong," he added. "Maybe with Cesc or other players it would have gone better, who knows?"

Real coach Jose Mourinho, by contrast, executed a successful game plan that appeared to be modelled on the one his former club Chelsea used in last week's first leg at Stamford Bridge.

Allowing Barca to dominate possession, defending resolutely and looking to unleash swift counter attacks worked for both sides, but they also needed a slice or two of luck to thwart World Player of Year and Champions League top scorer Lionel Messi and his team mates.

"In the end I have to take the consequences for my decisions and there is always a reason for those that I take," said Guardiola, who has yet to extend his contract beyond the end of this season, prompting speculation he could step aside.

"The adjective disappointing is not appropriate for what we did in London or here," he added.

Didier Drogba, the scourge of Barca last week, is Chelsea's main injury doubt having missed Saturday's 0-0 draw at Arsenal with a knee injury.

Not only did the Ivorian striker score the only goal, he continually disrupted the flow of the game by falling to the floor, prompting ridicule and criticism of his antics on Twitter and other social media.

If Drogba is missing, Fernando Torres will almost certainly lead the attack against a club