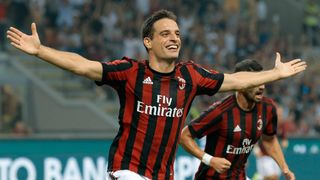 AC Milan midfielder Giacomo Bonaventura has returned to training after recovering from a muscle injury, boosting Vincenzo Montella's options ahead of a key Serie A clash with Lazio.

The Italy international, who missed the last three months of the previous campaign with an adductor problem, had featured in Europa League victories against CSU Craiova and Shkendija.

Bonaventura then missed the club's first two league games, wins against Crotone and Cagliari, and there were fears he could be set for another lengthy absence.

But the 28-year-old - one of the top players from last season's squad and still expected to feature regularly among 2017-18's new-look group - trained in full with his team-mates on Saturday, eight days before the trip to Rome.

"Following a warm-up in the gym, the players were divided into groups for a series of strengthening workouts and recovering drills, before moving on to athletic exercises," a Milan statement said.

"Lastly, the boys focused on tactics and played a final practice match before calling it a day. One of the session's highlight was the full involvement of Jack Bonaventura, who completed training with the rest of the group."

Check out our squad list for the group stage September 2, 2017

Bonaventura is among the players listed in Milan's Europa League squad, which was confirmed on Saturday. The Rossoneri are set to face Austria Vienna, AEK Athens and HNK Rijeka in Group D.

Jose Sosa and Jose Mauri are included despite being linked with moves away from San Siro, while Montella's squad also boasts high-profile signings such as Leonardo Bonucci, Andre Silva and Hakan Calhanoglu.