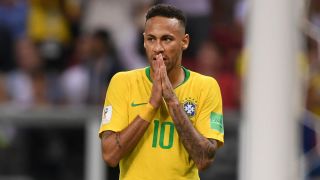 The world's most expensive player netted just two goals in Russia and often cut a frustrated figure as the Selecao were bundled out in the quarter-finals by Belgium.

His performances were at times overshadowed by the criticism he received for theatrically reacting to tackles and physical attention.

Ronaldo sympathised with the Paris Saint-German star, suggesting his influence was curbed by the fractured metatarsal which ended his club season in February.

"We all expected more from him because he's the star of the team," Ronaldo told SporTV, as quoted by Spanish publication Sport.

"I don't know if it was because of the operation he had on his foot or another problem but I saw him as quite limited on the pitch.

"To arrive at a World Cup following an operation and three months out is complicated. To play the first match as if nothing had happened is difficult."

Though Neymar will be 30 by the time of Qatar 2022, Ronaldo believes his former international team-mate still has time to make a mark on football's biggest stage.

"He must learn from this World Cup because at 26 he is still a young boy," said the 2002 champion.

"Either way, he's an extremely talented young man who carries a great deal of responsibility."