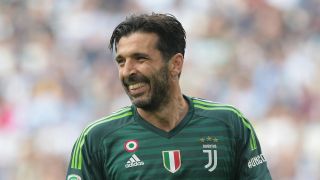 Gianluigi Buffon has completed a free transfer to Paris Saint-Germain after his contract with Juventus expired.

Buffon's 17-year stay in Turin came to an end following Juve's seventh successive Serie A title triumph and he could play beyond his 42nd birthday after penning a one-year deal with the option for a second with the Ligue 1 giants.

The goalkeeper, who said last month he was open to continuing his Italy career, is expected challenge Alphonse Areola for selection, with doubt cast over Kevin Trapp's future at Parc des Princes.

He announced his Juve departure in May and played his last game for the club in a 2-1 victory over Verona two days later.

Buffon bid a final farewell to Bianconeri fans when his contract ran out on Saturday, posting on Twitter: "I will never forget anything. I will always carry everything with me."

He is expected to be presented to the media in Paris on Monday.