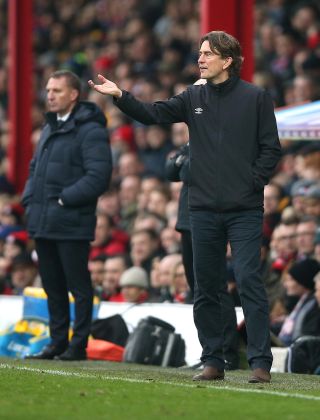 Brentford head coach Thomas Frank was pleased to avoid an FA Cup replay on Saturday after a 1-0 defeat to Leicester and thinks the rematches are killing the competition.

A much-changed Bees XI pushed the Premier League club all the way at Griffin Park with Halil Dervisoglu hitting the post and Luka Racic forcing Danny Ward into a superb save after Kelechi Iheanacho’s fourth-minute opener.

Due to both teams being in action on Tuesday, fringe players were given the opportunity to impress, with Brentford doing battle with Championship play-off rivals Nottingham Forest and Leicester in Carabao Cup semi-final action against Aston Villa.

“I think we ran them close enough,” Frank said. “What I didn’t want was a draw so if we scored in the last minute there was only two options.

“One was to take the centre-backs out or we put everybody up and I don’t understand how we can have replays in the FA Cup.

“I love the FA Cup, I think it is a fantastic tournament and I love that England have two cup tournaments – one of the only countries in the world. I love the culture and the tradition in England, but I don’t get (replays).

“I think that is part of killing one of the finest cup tournaments in the world. They can kill it a little bit with replays. I don’t get it.”

Put to the Danish coach that Tranmere would love to win a replay against Manchester United and the chance to visit Old Trafford, Frank argued even most at step three and four on the English football pyramid would rather not have replays.

He added: “If you are in League One or League Two and if they are close to getting relegated or promoted, do you think they want the extra game? I don’t think in general it helps.”

The Bees boss named an XI which contained six players aged 20 or below and he was happy with their effort against a Leicester team that had a handful of Premier League winners.

Rival manager Brendan Rodgers also made a number of changes – nine in total – with the Foxes priority the last four encounter in the Carabao Cup with Villa.

Despite this, Leicester managed to triumph and in the process ensured Griffin Park hosted FA Cup football for the last time, with Brentford moving into a new stadium during the summer.

📄 Griffin Park plays host to its final @EmiratesFACup tie as @LCFCedge us out by a single goal#BRELEI | #BrentfordFChttps://t.co/0SwR1nPeJ4— Brentford FC (@BrentfordFC) January 25, 2020

“You see how Brentford have done this year, they have been fantastic and not only that the football they play is great,” Rodgers said.

“Normally before games I stay in the changing room when our players warm up, but before the game I found myself coming out onto the pitch and this is a club with a great history.

“Obviously they will move on from here and with this the last FA Cup tie, it was really special to be here.

“I hope they go on and finish the season really well. Seeing the standing area behind the goal, it brings you back to real football.”