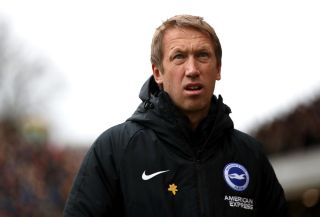 Brighton boss Graham Potter says it was a “normal” decision for him to take a pay cut and has backed his players to follow suit.

Potter, technical director Dan Ashworth and chief executive Paul Barber have taken a “significant voluntary pay cut” for the next three months in order to ease the financial pressure on the Seagulls.

It means that non-playing staff will not be furloughed imminently and comes after chairman Tony Bloom originally turned down the trio’s offer a fortnight ago.

Potter said: “I spoke with Tony, it was a couple of weeks ago I think, and it just felt like a normal thing to offer him because he has been good to me.

“I know the pressure he is under as a chairman, and the challenges he faces, it is a small part we can do, but it is important to offer.

“As things have moved forward we have come to the right decision to do what we have done.”

Potter has followed Bournemouth counterpart Eddie Howe in taking a decrease in pay, but the clamour for players to reduce their hefty wages continues to grow.

It is a matter being discussed by the Professional Footballers’ Association and Potter hopes the right decision is made.

“The players, I can only speak of ours, they are aware of the situation, they have made their own charitable donations without any direction from us, so they have done it off their own back,” he added.

“I am sure they will be willing to help the football club, it is up to them and the PFA to come up with the right conclusion.

“You can understand the criticism, on the flip side the Premier League contributes to the treasury in an enormous way.

“We want to do the right thing as a collective, as a humanity, I am pretty sure football will come to those conclusions.

💬 "This is to help to ensure none of our core staff suffer a wage reduction during this uncertain period.— Brighton & Hove Albion ⚽️ (@OfficialBHAFC) April 2, 2020

“It is up to them, I am my own person, they have got to make the calls themselves, I made that decision for me, for my family for where I sit in the football club. It is up to them.”

Potter also confirmed that the unnamed Brighton player who contracted the virus is now symptom-free and healthy again.

He said: “The guy that tested positive is symptom-free now, made a good recovery. We have had a couple more tested with symptoms but there is no problems, nothing to worry about.”

Tottenham, to much criticism, Newcastle and Norwich are among the Premier League clubs to furlough staff and Barber says that is not out of the question for his club.

“I think we have got to make sure we do everything we possibly can to look after our football club and our charity,” he said.

“I am not saying anything is impossible, we haven’t yet taken the decision to furlough staff, it is something we are actively having to consider.

“We have seen our income literally disappear overnight, but our costs have continued.”