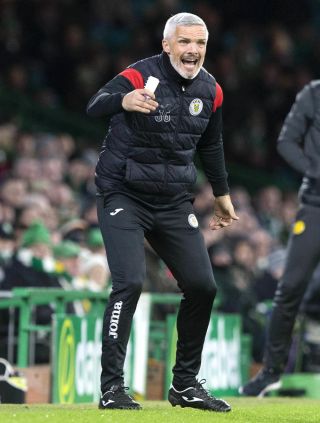 St Mirren manager Jim Goodwin praised his players for a professional performance as they eventually got the better of non-league Broxburn Athletic to book their place in the fifth round of the William Hill Scottish Cup.

The Ladbrokes Premiership side struggled in front of goal for long spells but a second-half double from Jon Obika and another from Danny Mullen put a more respectable sheen on the scoreline.

Goodwin said: “We’re in the next round, that’s the bottom line and the aim before ball is kicked. We knew it would be difficult. Everyone would expect us to turn up and wipe the floor with them.

“But I said it would be difficult and we give great credit to Broxburn. In the first half especially they made life difficult and we struggled to break them down. At times we didn’t work the goalie enough and our delivery wasn’t what it needed to be.

“But I give credit to my players – they were professional and weren’t slack in possession. They just couldn’t find that killer pass or work the goalie.

“But in the second half we looked better. Broxburn tired which was going to be the case because fitness-wise we have to be ahead of them. Gaps started to appear and it looks comfortable at 3-0 but it wasn’t the case.”

This was the sixth Scottish tie of the season for Broxburn from the East of Scotland Premier League and for long spells they looked comfortable against Premiership opposition.

He said: “They did great. Three-nil sounds like a smashing but St Mirren had all the play. They’re a better team but we stuck at it, in the first half especially.

“When you think it was tier one versus tier six we showed there’s a bit of quality further down the chain.”