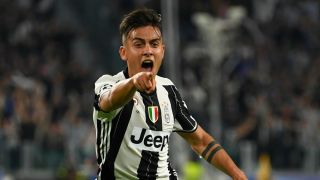 Paulo Dybala believes it could finally be Juventus' year to win the Champions League, insisting the club's long-serving players deserve to lift the trophy in Cardiff.

Juventus travel to Monaco in the first leg of their semi-final on Wednesday as Massimiliano Allegri's men close in on the treble, with the Serie A title almost secured and a place in the Coppa Italia final against Lazio already booked.

Dybala said Juventus players such as Gianluigi Buffon, Claudio Marchisio, Leonardo Bonucci, Andrea Barzagli and Giorgio Chiellini deserve to win the competition due to their long service at the club, with Juve having lost the 2015 final to Barcelona.

"This could be our year – we're doing very well in all the competitions we're involved in," Dybala told the UEFA website. "It won't be easy because there are another three teams who, like us, want to win it, but we're going to give our all.

"Winning the competition would be an objective fulfilled, because it's one of my ambitions, as it is for my team-mates.

"It would be a thoroughly deserved reward for many of the boys who have been here for a long time and done so much over the years, from Gianluigi Buffon to Claudio Marchisio, Leonardo Bonucci, Andrea Barzagli and Giorgio Chiellini.

"They haven't been able to lift the trophy yet and I think they really deserve to."

Dybala's double set up Juve's 3-0 aggregate win over Barcelona in the quarter-finals but the Argentine - who agreed a new contract in April to stay at the Serie A leaders to 2022 - is expecting a difficult semi-final against free-scoring Monaco.

"We know that both legs are going to be very tough," Dybala added. "Monaco are top of their league and are doing very well.

"They're a tough team - they're strong and they have some really fine players, but so do we, so it's sure to be a great spectacle. We've seen that they attack in numbers and score a lot of goals, but that means there will also be some space for us.

"I try to be a quick-witted player and think about what I'm going to do in advance, because you don't get much time on the ball. Nowadays football is very fast-paced, and you've got to be switched on at all times.

"I try to analyse games, look at how opposition teams and players operate, and make the most of my abilities, especially my left foot, which is probably my biggest asset. I just look to do my best to help my team-mates."