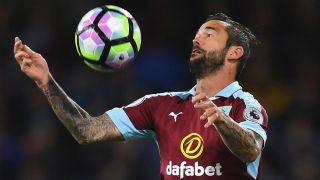 Sean Dyche has confirmed Burnley will be without Steven Defour for this weekend at least after the Belgium international suffered a hamstring injury.

The midfielder has become a key player for the Clarets since making an £8million switch to the Premier League from Anderlecht in August.

But the 28-year-old will not be involved against Everton at Turf Moor, though manager Dyche does not believe he will be sidelined for long.

"Steven has a straightforward injury and we're not expecting a long lay-off," he said.

All of Burnley's seven points this season have come at home, but Everton are flying higher under Ronald Koeman and Dyche knows they will present a difficult obstacle to overcome.

He added: "There is no pressure on us. We have handled big occasions before and we have a good feeling about playing at Turf Moor.

"I think we have to be at it in every game. There are certain challenges that are really tough and Everton are a very good side."