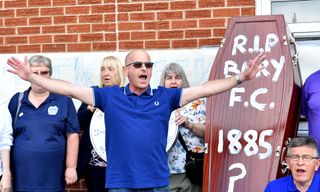 Bury are now almost certain to be expelled from the English Football League after a proposed takeover by C&N Sporting Risk has fallen through, just 90 minutes before a league-set deadline for the deal to be completed.

The League One club’s owner Steve Dale was originally given until midnight on Friday to prove he could pay off Bury’s debts and fund the next two seasons or find someone who could.

This seemed to be the rescue Bury fans had been praying for and on Saturday morning the EFL extended its deadline until 5pm on Tuesday to give Dale and C&N more time to complete the deal.

C&N, however, was disappointed not to be given more time and has now issued a statement to say it simply cannot proceed – a decision that leaves the 134-year-old club needing a miracle.

In a statement, C&N said: “We are grateful to the EFL for the short extension they granted to us so that we could continue with due diligence, and for their acceptance of our proof of funds capable of mounting a credible takeover. This has been worked on around the clock by our team and advisors for the past 72 hours.