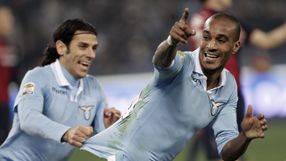 There was also an isolated incident of racist chanting directed at Cagliari player Victor Ibarbo from a small section of Lazio's notorious Curva Nord fans.

The chants were almost drowned out by whistles from the rest of the Olympic Stadium but it led to both captains being told the match could be suspended if the abuse continued.

"Lazio is always called a racist club which is not true," president Claudio Lotito told Sky Italia. "We have lots of non-white players.

"We can't control the actions of individual fans. Coming to these sorts of judgements you risk criminalising thousands of fans for the actions of a few.

"Since I became president... certain modes of behaviour that were there before are no longer there. We are tough on the fans when they behave in a way that is against the law but today I can say the majority of the fans behaved themselves," said Lotito.

Second-placed Lazio have now gone eight league games unbeaten and are on 39 points, four clear of Fiorentina in third. Cagliari remain a point above the relegation zone in 17th position after suffering their sixth straight defeat in Serie A.

The visitors were more than a match for Lazio and almost took a shock lead after 18 minutes.

Ibarbo's burst down the right ended with Radja Nainggolan forcing a wonder save from Federico Marchetti.

Miroslav Klose then missed the best chance of the first half seven minutes before the break.

The Germany international, who has 10 Serie A goals this season, was picked out in the box by Lazio playmaker Hernanes but he dawdled on the ball and after rounding goalkeeper Michael Agazzi he could only scuff a weak shot wide of a gaping net.

Six minutes before Klose's miss, Pulga was dismissed for complaining to referee Daniele Orsato about a foul given against his team.

He became the second coach to be red-carded after Catania's Rolando Maran was sent to the stands in their 0-0 draw with Torino earlier in the day.

Lazio then put the Sardinian side under increasing pressure and after Agazzi did well to save Antonio Candreva's smart 79th-minute shot, Abdoulay Konko tapped home the equaliser from the resulting corner.

The home team went in front seven minutes later when Orsato awarded a penalty for a foul by Agazzi on Klose, a decision which led to Cagliari being reduced to 10 men.

Agazzi flattened Klose after the striker tried to chip him and received a second yellow card.

While Candreva waited to take the penalty Cagliari players swarmed around the referee and substitute Andrea Cossu was sent off for protesting.

Eventually the Lazio midfielder slotted in his spot kick to keep his side right in the title hunt.