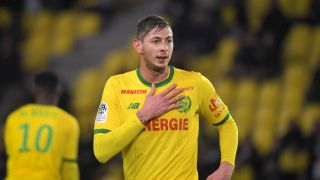 The French Civil Aviation Authority has confirmed the 28-year-old was onboard a plane that has gone missing while travelling from Nantes to Cardiff late on Monday.

A statement from Cardiff executive director and CEO Ken Choo on Tuesday read: "We were very shocked upon hearing the news that the plane had gone missing. We expected Emiliano to arrive last night into Cardiff and today was due to be his first day with the team.

"Our owner, Tan Sri Vincent Tan, and chairman, Mehmet Dalman, are all very distressed about the situation.

"We made the decision first thing this morning to call off training with the thoughts of the squad, management staff and the entire Club with Emiliano and the pilot.

"All of us at Cardiff City FC would like to thank our fans, and the entire footballing family for their support at this difficult time.

"We continue to pray for positive news."

Argentine Sala, who was confirmed as Cardiff's record signing on Saturday after opting to leave Ligue 1 Nantes, is said to have been one of two people on the aircraft that disappeared while crossing the English Channel.

An immediate search and rescue operation was launched in the area but was halted in the early hours of Tuesday due to worsening weather conditions. Local and French authorities resumed their efforts at 0800 local time.

The latest update from Guernsey Police, given at 1315 local time, read: "There are currently two planes, two helicopters and a lifeboat searching for the aircraft.

"No trace has yet been found. Conditions during the search last night were challenging, with wave heights of up to two metres, with heavy rain showers and poor visibility.

"Today the sea is much calmer, and although visibility was good, it is now deteriorating.

"UK authorities have been calling airfields on the south coast to see if it landed there. So far we have no confirmation that it did.

"The search will continue throughout the afternoon, with a decision taken at sunset as to whether it will carry on overnight."

Channel Islands Air Search Chief Officer John Fitzgerald admitted, however, the longer the search goes on, the lower the chances of finding the plane and its passengers.

He told Wales Online: "We have been up since early this morning and just had a crew change at lunchtime, but there has been nothing in terms of finding casualties.

"As time goes on, the chances of finding survivors gets more and more unlikely. The water temperature is extremely cold at this time of year. The area is very tidal and moves very quickly but the search conditions are quite good as it is overcast, which helps because there is no glare off the water."

Sala's father, Horacio, told Argentine media he was "desperate", according to L'Equipe.

His mother, Mercedes, said to C5N: "The plane is [owned by] the president of the Cardiff club. We were informed the plane had disappeared and that they were looking for it. We're in touch minute by minute."

Sala joined the Bluebirds from Nantes on a three-and-a-half-year deal. He said his goodbyes to his team-mates at the Ligue 1 club on Monday.

It is reported that Nantes' Coupe de France match with Entente SSG, scheduled for Wednesday, will be postponed.

FIFPro and many players worldwide are hoping, wishing or praying that Emiliano #Sala is safe. Our thoughts are with him, his family, friends and team mates. pic.twitter.com/cQHAul5Bt3— FIFPro (@FIFPro) January 22, 2019