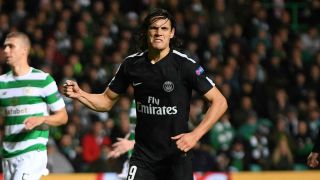 Edinson Cavani, Kylian Mbappe and Neymar all found the net as Paris Saint-Germain inflicted Celtic's heaviest ever home defeat in Europe by racking up a 5-0 scoreline at Parkhead.

PSG's star-studded forward line tore the Scottish champions apart to not only maintain their perfect start to the new season but also send out a warning to their Champions League rivals.

Playing in the competition for the first time since his world-record transfer from Barcelona, Neymar raced onto Adrien Rabiot's throughball to give the dominant French side a deserved lead in the 19th minute of the Group B contest.

The scorer turned provider for PSG's second, heading back across goal for Mbappe to find the net for the sixth time in his last seven Champions League games, the previous five coming in last season's knockout stages for Monaco.

Cavani converted a 40th-minute penalty to make it 3-0 and, in the process, become his club's leading scorer in European competitions, his 21st goal moving him ahead of Zlatan Ibrahimovic on the all-time list.

The Uruguayan added another to his tally with a header in the 85th minute after Celtic's Mikael Lustig had presented PSG with a fourth by turning a Julian Draxler cross into his own net.

Despite a raucous home crowd doing their best to rouse their players prior to kick-off, Brendan Rodgers' side spent much of the opening 45 minutes chasing after PSG's collection of superstars.

Dominant from the outset, PSG took the lead when Neymar escaped teenage full-back Anthony Ralston and fired beyond the advancing Craig Gordon, giving him his fifth goal in as many matches for his new club.

By that stage, PSG had already seen a goal ruled out for offside, Cavani the player denied as he was adjudged to be fractionally beyond the last defender when turning in Layvin Kurzawa's cross.

The striker then fluffed his lines when Neymar's unselfish header gifted him a glorious opportunity from six yards out, although Mbappe capitalised on his team-mate's profligacy to smash a rising shot high into the Celtic net.

Cavani did, however, get his landmark goal before the break, converting from the spot after he had been pulled back by defender Jozo Simunovic as they battled to reach a cross.

6 - Kylian Mbappé has scored in six of his last seven games in the Champions League. Astounding. September 12, 2017

Leigh Griffiths' free-kick and a low drive from Scott Sinclair kept PSG goalkeeper Alphonse Areola on his toes before the interval, while the former fluffed a glorious chance to score from Kieran Tierney's cross in the opening minutes of a second half played at a much more sedate pace.

Ralston raised the noise levels inside Celtic Park when he followed a rampaging run with a hefty challenge on Thiago Motta, the 18-year-old responding to the booking from referee Daniele Orsato by raising his fists in defiance to his supporters.

Yet Celtic's hope of at least holding PSG scoreless in the second half disappeared when Lustig had the misfortune of deflecting Draxler's driven ball from the right into his own goal.

It was fitting that Cavani completed the rout when he acrobatically headed in Kurzawa's cross at the back post, as PSG wrapped up an emphatic win on the road. Next up in Europe: Bayern Munich at home.