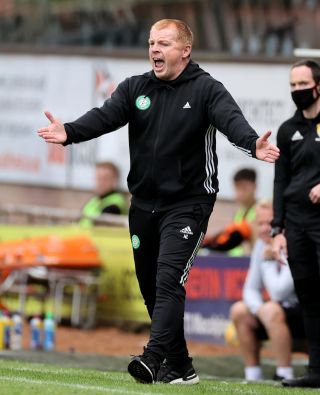 Neil Lennon insists Celtic got the win their performance deserved after Albian Ajeti’s late strike gave the Hoops a narrow 1-0 victory over Dundee United at Tannadice.

After a goalless first half the visitors increased the tempo and mounted a series of attacks but a well-organised home side defended stoutly.

However, in the 82nd minute Switzerland striker Ajeti, making his league debut as a second-half substitute following his recent £4.5million move from West Ham, repaid a chunk of that fee when he fired in from 12 yards.

Hoops boss Lennon said: “We got our just rewards, it was a great performance and great win.

“The only disappointing thing is the scoreline – we should have won the game very comfortably.

“So you have to credit Dundee United or (Benjamin) Siegrist in goal who made a couple of great saves.

“We were a little bit loose in the final third but the performance was really good. From 25 minutes on, we were outstanding.

“But the attitude today was brilliant and some of the football tremendous.

“We deserved even better out of the game but we’ll take the win.”

Lennon was delighted to see Ajeti get his first Celtic goal.

He said: “It’s always good for a striker to come in and make an early impact.

“You can see he’s not match fit yet but that’ll do his confidence the world of good.

“He did great to keep the ball alive for the goal. We were thinking he was going to flick it into the goalie’s arms and it would die.

“But he kept it alive then flashed a great finish. And I think some of his link-up play was good as well.

“He’s a work in progress in terms of his fitness.”

Ajeti said: “I am very happy.

“First of all it was very important to get the three points here. It was a tough game against a strong opponent.

“I know the keeper from Switzerland, he is a friend of mine but today we were opponents and I am happy I could get the winning goal.”

United boss Micky Mellon was pleased with the way his side, newly promoted to the Premiership, performed against the nine-in-a-row champions.

He said: “We worked our socks off. When I came in at the start of the season we wanted to move the club forward and be a team that could make an impact at this level.

“We knew were coming up against the Scottish champions and we were going to make sure we took part in the game and not sit back like a lot of Scottish teams do and get their bellies tickled by Celtic.

“We wanted to have a right good go as much as we could and I think everyone that was here or watched on telly would have to agree that we did that for large spells.”