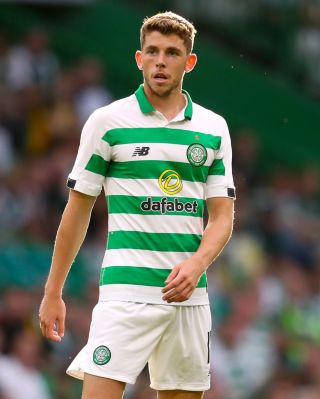 Ryan Christie’s second-half penalty earned Celtic a 1-1 draw with Rennes in their opening Europa League group game in France after they held on with 10 men in a frantic finale.

The Scottish champions fell behind to a spot-kick from M’Baye Niang in the 37th minute after some rash defending from Kristoffer Ajer.

Celtic had a strong claim of their own rejected before James Forrest was fouled in the box and Christie converted in the 59th minute.

A point for the Bhoys in our #UEL Group Stage opener away in Rennes 🇫🇷 #RENCELpic.twitter.com/f6X4C3XzOv— Celtic Football Club (@CelticFC) September 19, 2019

Neil Lennon’s side showed plenty of attacking intent and were well worth their point in Brittany but they had to survive a man down after late substitute Vakoun Bayo received two yellow cards in quick succession.

An unchanged Celtic side created the first decent opening when Forrest picked out Odsonne Edouard at the back post. The French striker went for a spectacular scissor-kick but shot well over.

The hosts soon forced a chance through Boli Bolingoli’s mistake. Raphinha crossed for Clement Grenier but the midfielder headed wide.

Celtic were showing plenty of ambition and, after a sustained period of possession, Mohamed Elyounoussi was inches away from connecting with Bolingoli’s low cross after Edouard’s dummy.

The hosts went straight up the park and forced a two-on-two counter-attack but Christopher Jullien produced an excellent tackle.

Edouard threatened moments later as he beat two men but was then booked for diving in the box.

Raphinha, an £18.5million summer signing from Sporting Lisbon, cut inside Bolingoli and Callum McGregor before firing a shot that Fraser Forster parried.

But that was a rare moment of danger before Ajer gifted the hosts a penalty. The Norwegian panicked as Niang turned him and headed for the by-line, and brought the striker down with a mixture of his arms and leg. Niang waited for Forster to make his move and picked the opposite side of the net.

Celtic should have had their own penalty after Joris Gnagnon stood on Christie’s foot just inside the box after being beaten to Edouard’s knockdown. Spanish referee Jose Maria Sanchez and his assistant had a good view but rejected Christie’s pleas.

But Neil Lennon’s side only had eight minutes to wait. Christie picked up a loose pass and fed Forrest, who made the most of Damien Da Silva’s wild swing to go down. Christie kept his composure to find the corner.

Grenier soon came close from a free-kick but Celtic were not content with the draw and Forrest was just over with a 25-yard curler.

The visitors lost Bolingoli to a muscle strain but Jonny Hayes came on and defended well, including a strong but fair challenge on the cusp of the box which had the home fans up in arms and Hamari Traore writhing in agony.

Bayo replaced Edouard in the 84th minute and was booked for an aerial challenge which resulted in Da Silva being carried off on a stretcher in the 89th.

The striker was sent off moments later in controversial circumstances after competing for a loose ball when Olivier Ntcham’s shot was spilled. He appeared to clip Edouard Mendy’s hand and the referee waved play on but the goalkeeper rolled about clutching his face and, after a huge delay, another yellow card was produced.

However, Celtic came closest to a stoppage-time winner when Christie’s shot was deflected wide.