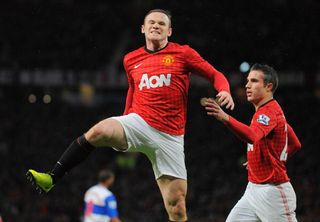 Speculation has been rife that Rooney will depart the English Premier League champions, despite United insisting the England international striker is off limits.

Chelsea have already had a bid for Rooney swiftly rejected, although Jose Mourinho is expected to table another offer for his number one transfer target.

But despite the ongoing speculation surrounding Rooney's future, Charlton believes the 27-year-old will stay in Manchester.

"I don't like losing really, really good players, and he is a great player."

Charlton, who has made the second most appearances for United behind the evergreen Ryan Giggs, is the club's all-time leading goalscorer with 249 goals.

Rooney has netted 197 goals for United since leaving Everton in 2004 and Charlton remains hopeful the striker will break his United record.

"I was hoping one day that he might score as many goals as I had that would have been really nice if he was at our club and I'm still thinking that way anyway," he said.

David Moyes has been tasked with filling the void left by Sir Alex Ferguson, who retired at the end of last season.

Some have suggested Moyes may struggle to cope with the pressures that accompanies leading England's most successful club but Charlton stressed that Moyes is the right man to take the club forward.

"David Moyes is a first class coach and a manager," said the 75-year-old former England international.

Charlton also praised the performances of new signing Wilfred Zaha, who he believes has been the best player on United's Asian Tour.

"I remember when we signed him (Wilfred Zaha) that he was a confident lad," he said.

"He has been maybe the star of the tour that we've had here, give him the ball and all he wants to do is to beat the defenders and smash the ball into the back of the net and I think for that, crowds are going to love him."