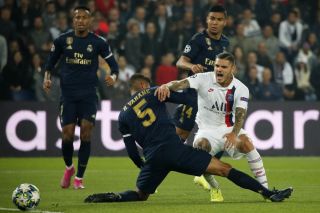 Chelsea signed no players during the January transfer window, despite having their transfer ban lifted.

Although, the west London club did announce the signing of Hakim Ziyech from Ajax on a pre-contract agreement that will see him join in June.

But it was a striker that Chelsea were said to be on the hunt for in the winter window as head coach Frank Lampard sought reinforcements.

Tammy Abraham has been the star man up top for the Blues this season, but Lampard was thought to be wanting quality competition and support for the England international.

Olivier Giroud has stepped up to the challenge in recent games whilst Abraham has been struggling with injury.

The Frenchman scored in Chelsea's win over London rivals Tottenham Hotspur on Saturday to keep his hopes of a Euro 2020 spot alive.

But, according to FC Inter News, Chelsea are considering a summer bid for Mauro Icardi.

Icardi is currently on loan at PSG, and it's a possibility that the French club will opt to make the move permanent.

However, the report states it could be a 'fiery summer' due to the interest surrounding the player.

Inter are believed to be keen to sell the Argentinian striker and they are supposedly not short of suitors.

It's reported that Real Madrid are also keeping an eye on the situation as they begin to plan for life after Karim Benzema.

Juventus are also said to be interested in Icardi and could poach the 27-year-old from their closest Serie A rivals.

Chelsea could face a bidding war if they retain their reported interest in Icardi come the next transfer window.