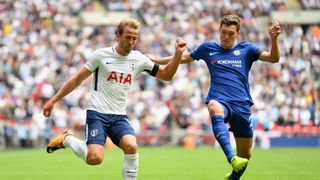 Andreas Christensen has talked up the pathways into Chelsea's first team via their stockpiled youth ranks as domestic-based Blues fans look for Ruben Loftus-Cheek and Tammy Abraham to make the grade at Stamford Bridge.

Loftus-Cheek and Abraham each made their senior England debuts in the recent international break, having impressed on loan at Crystal Palace and Swansea City respectively this season.

At 21, there were fears that midfielder Loftus-Cheek had stalled in his development and would fail to make a breakthrough at Chelsea, for whom he had a glittering youth career, but a composed international bow against Brazil has raised hopes of his ability to cut it at the highest level.

Christensen spent two seasons on loan at Borussia Monchengaldbach before returning to become a first-team regular under Antonio Conte this term, and he sees no reason why other young Chelsea talents cannot replicate his success.

"It's different for every player," Christensen told Sky Sports. "I was in the right place at the right time, everything just clicked and it was perfect for me.

"That's the most important thing for the players that go out on loan. They have to find what's working for them and the perfect environment for them to develop.

"When I was on loan I took the opportunity to come back to London sometimes to watch the games and go into the dressing room after so everyone knew what was happening with my career which was a good feeling."