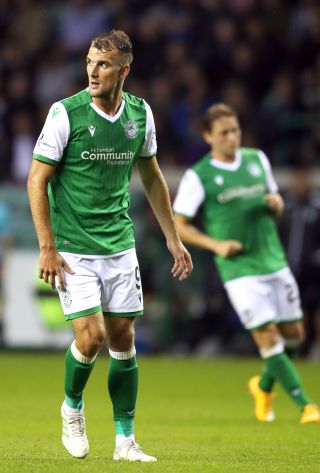 Christian Doidge netted the only goal at Tannadice to extend leaders Hibernian’s 100 per cent record in the Scottish Premiership.

Doidge pounced on a loose ball to strike in the 65th minute and make it three wins from three for Jack Ross and his team.

Dundee United had chances to level but Micky Mellon’s side suffered their first defeat of the season.

Hibernian announced the departure of Adam Jackson to Lincoln shortly before kick-off and named the same attacking line-up that earned them a 4-1 win at Livingston on Saturday with two wingers and two strikers.

United were again without Lawrence Shankland because of an ankle injury while Liam Smith dropped out with a knock. Mellon handed former Blackpool centre-back Ryan Edwards a debut as he switched to a back three. Nicky Clark came in up front.

United also lost Jamie Robson early on following a serious aerial collision with Paul McGinn, who recovered after treatment. Robson was booked by referee Don Robertson as he walked off in a daze.

After a dramatic day off the pitch when Celtic defender Boli Bolingoli’s flying visit to Spain threatened to force a pause of the season, there was little to report in the first 45 minutes.

Hibs midfield pair Alex Gogic and Joe Newell both took yellow cards for halting United attacks and more fouls from the pair offered Clark two shots at goal, but neither tested Ofir Marciano. Hibs could not threaten either with Josh Doig and Daryl Horgan off target from long range.

The highlight of the half was Kevin Nisbet’s nutmeg on Mark Connolly near the bye-line. Even then the United defender hauled the Hibs striker down just outside the box and the free-kick came to nothing.

United had a better chance early in the second half when Luke Bolton sped past Doig and pulled it back for Ian Harkes on the edge of the box but the midfielder dragged his shot wide.

Connolly cleared Boyle’s low cross from the goalmouth as Nisbet looked to force home and Hibs soon took the lead after a cross from Gogic. Doig was first to it and the loose ball broke kindly for Doidge to fire high inside the near post.

Doig looked like he might have been inches offside when Nisbet flicked Gogic’s cross on, but any infringement would have been impossible to verify without video assistance.

United fought back. Calum Butcher’s deflected shot went close, Connolly headed wide from a corner and the hosts almost netted a memorable equaliser after Louis Appere chested down for Peter Pawlett, but the midfielder volleyed wide.