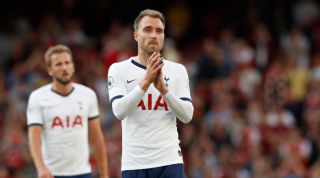 Manchester United will renew their interest in Tottenham playmaker Christian Eriksen when the transfer window reopens in January, according to reports.

United attempted to sign Eriksen this summer but were not convinced that the player wanted to move to Old Trafford.

The Denmark international is thought to favour a transfer to Spain, with Real Madrid and Atletico Madrid mentioned as potential destinations before the European market closed for business at the start of September.

However, Goal report that United have not yet given up hope of tempting the Spurs schemer to swap north London for Manchester.

Eriksen is out of contract at Tottenham next summer and may therefore be available for a cut-price fee in January.

United are willing to back Ole Gunnar Solskjaer in the transfer market after the team’s mediocre start to the 2019/20 campaign.

And with Spurs chairman Daniel Levy keen to avoid losing one of his star players on a free at the end of June, United sense an opportunity.

The Red Devils were willing to pay £70m for the former Ajax man in the summer, although they may push for a further reduction in January.

However, Eriksen is likely to have doubts over the move if United are lagging behind in the race for the top four.

He would also be in a better position to command a higher wage if he was a free agent.

However, United hope that the uncertainty over the future of Real Madrid manager Zinedine Zidane plays into their hands.

Zidane is under pressure despite los Blancos’ position at the top of the La Liga table, and the club’s transfer targets could change if he is replaced in the hot seat between now and next summer.

United return to Premier League action against Arsenal on Monday, while Tottenham and Eriksen take on Southampton on Saturday.