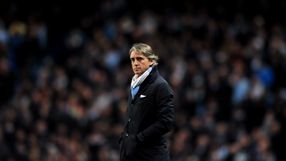 United's shock 1-0 defeat at Wigan Athletic on Wednesday combined with City's 4-0 home rout of West Bromwich Albion cut the gap at the top to five points and that can be shaved to two before United host Aston Villa on Sunday.

While the odds are still heavily stacked in United's favour, a City win at Carrow Road would add some pressure on the leaders, who travel across town to face their closest rivals on April 30.

"I think United is a fantastic team and I don't think that they will drop five points," Mancini told the club's website.

"It is important for us to finish well because this is the best season for Manchester City since we won the championship in 1968. This is not mind games, United have fantastic experience and we don't have it!

"Our fans believe and we play for them. I will fight and my team will fight everyday but it may be too late."

With Carlos Tevez restored to the starting line-up against West Brom, City played with a freedom not seen in recent weeks on Wednesday, although a trip to a Norwich side that beat fourth-placed Tottenham Hotspur on Monday will be a test of the away form that has undermined their title tilt.

City could be boosted by the return of Yaya Toure for the lunchtime kick-off after the midfielder limped off in the 1-0 defeat at Arsenal last Sunday - a loss that appeared to have sealed another title for United.

"He has a problem with his knee but I do not think it is serious and he could be back at the weekend," Mancini said.

"It is important [to beat Villa and Everton in the upcoming home fixtures]," Giggs told MUTV. "We're at Old Trafford and at home and we'll be looking to win both games and put the pressure on. Throughout the season, we've had poor performances and poor results but we've always bounced back."

With Tottenham playing Chelsea in the FA Cup semi-final and Newcastle United not in action, Arsenal can move eight points clear in the race for third place with victory over Wigan Athletic on Monday at Emirates Stadium.

At the other end of the table, bottom club Wolverhampton Wanderers could be all but relegated if they lose at Sunderland but there is still genuine hope for some of the other sides scrapping in the basement.

Queens Park Rangers, two points above the bottom three, could go a long way towards ensuring top flight safety if they win at West Brom on Saturday while Blackburn Rovers would move out of the bottom three with victory at Swansea City.