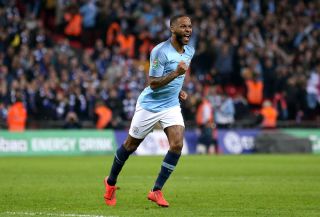 Raheem Sterling’s season has been a triumph on a number of fronts.

Not only has the Manchester City and England forward shone on the field, but he has also emerged as a figure of gravitas off it, transforming perceptions of him in the process.

On Sunday evening, the 24-year-old was announced as the 2018-19 Professional Footballers’ Association Young Player of the Year.

And on Monday morning, Sterling was named  as the 2019 Footballer of the Year by the Football Writers’ Association, with 62 per cent of the ballot. Sterling was more than 100 votes ahead of Liverpool defender Virgil Van Dijk.

Even though he enjoyed a fine campaign in 2017-18, the position Sterling now finds himself in compared to 12 months ago is markedly different.

His willingness, particularly, to speak out about racism could have a huge and positive impact on the game for a whole generation of players.

Sterling’s talent has always been obvious, ever since he first burst onto the scene as a precocious 17-year-old with Liverpool seven years ago, yet it has taken time for his performances to be appreciated by a wider audience.

Impressions that he was a youngster too big for his boots were formed too readily after he was admonished by then Liverpool boss Brendan Rodgers in a fly-on-the-wall documentary in 2012.

Other off-field incidents did not help and nor did he emerge well from the PR battle that surrounded his acrimonious move to City in 2015.

And now @sterling7 has won @theofficialfwa’s Footballer Of The Year Award. The one for grown ups. As a new member of the FWA I voted for Sterling. He’s had a truly outstanding season and has been a delight to watch. Well played 👏👏— Gary Lineker (@GaryLineker) April 29, 2019

It also took time for him to settle at the Etihad Stadium, his first campaign being one of inconsistency and followed by a dismal Euro 2016 with England.

Things began to turn around after the arrival of Pep Guardiola at City, the inspirational former Barcelona and Bayern Munich boss taking a keen interest in Sterling’s well-being and footballing education.

Guardiola’s impact was obvious by last season as Sterling netted 23 times for City and played a key role in their capture of the Premier League title. Yet the praise for him was not universal. Some critics still pointed to his misses or a tendency to go to ground too easily, while others homed in on his private life.

Over the years he has been depicted as too flashy by some for buying his mother a house and castigated for having a rifle tattooed on his leg before being given chance to explain its meaning.

Conversely he has also been labelled, effectively, as a cheapskate for having the temerity to spend money on budget flights and in places such as Greggs, Poundland and Primark.

It was in light of this that he found himself the subject of many fans’ ire at the World Cup last summer. True, he may not have set the tournament alight, but he was still a key member of the England side that reached the semi-finals in Russia. That he was booed so often, and rated so badly in man of the match polls, seemed unjust and harsh.

It was to his credit that he brushed this off. He returned to City and excelled, taking his game to another level. The finishing improved further, the assists became more frequent, the runs more cutting, the passes more incisive and the anticipation more intuitive.

Yet it is not just his starring role in City’s outstanding season – fighting for a quadruple until mid-April – and some fine match-winning displays for England that elevated him to another level, but his increasing maturity off the field.

In December, Sterling was the victim of racial abuse at Chelsea. He responded by making his voice heard, raising questions about the media’s portrayal of black players in the process. That in turn forced news organisations to rethink their handling of certain stories.

received so much love & support for this ❤️ makes me faithful for our fight #KickRacismOutOfOurStadiums— Raheem Sterling (@sterling7) March 26, 2019

He became a leading light on racism, calling for tougher punishments for those guilty of it, and emerged as a person of genuine substance.

Sterling reaches the end of the season as one of the most significant players in the game, as a fine ambassador for the sport and a true role model.