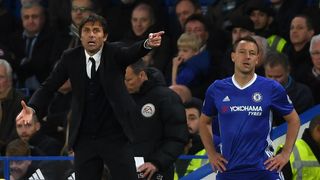 Chelsea head coach Antonio Conte has hailed John Terry's positive influence and stressed the centre-back has been key to their success this season.

Terry has only featured sparingly this campaign, with Monday's 4-3 win over Watford just his eighth Premier League outing in 2016-17, but Conte is adamant the 36-year-old has been hugely helpful off the pitch.

"About John, first of all, I am looking forward to see him lift the trophy after the game against Sunderland on Sunday and I think all the players want to see this. This is the right final for John," Conte stated at a news conference.

"John helped me a lot in my first season, on and off the pitch. He always sends the right message to the players in every moment of the season.

"John took this decision to continue to play regularly and play every game, and for this reason he preferred to leave Chelsea and to play every game I do not know where. For sure, for us, this is a big loss next season.

"I think it is a pity for me, but I have to respect his decision because I think, when you arrive at this moment and your head and body tell you to continue to play, then it is right to carry on and continue to play, to try and play regularly every game."

Terry somewhat surprisingly suggested after the game against Watford that he could hang up his boots altogether at the end of the season, but Conte does not think the centre-back will retire just yet.

"No, he should absolutely not retire," Conte added.

"John wants to continue to play. I wish for him and his family the best.

"Chelsea will always be his home because John, first of all, is a great man and a great legend and player for Chelsea, and in future for the team he decides to play for."