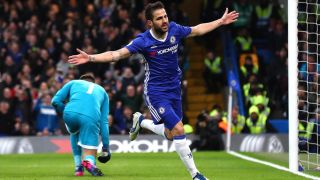 Fabregas, 29, battled for game time early in the season, but has become a more important player for the runaway Premier League leaders in recent matches.

Still, the Spaniard has made just seven league starts this campaign, well below what he is used to.

But Conte praised the World Cup and European Championship winner, saying his character had impressed him.

"He has always had a great impact, whether he starts a game or comes on. He always has a great impact because he is technically very good, and can put the ball where he wants," he told UK newspapers.

"He's a great player. Often he's decisive with the pass, with the assist, and also to score a goal.

"For sure, Cesc gives you great quality, great fantasy and assists.

"I'm very pleased to see that in him, his commitment and work-rate. This season he faced a new situation. In the past, he has always played every single game. It's not easy to change.

"But, for sure, Cesc showed me that he is not only a great player but a great person. I think, this season, he has improved a lot in all aspects and, for me, he is a really, really important player."

Chelsea are 10 points clear atop the league table ahead of a trip to Stoke City on Saturday.