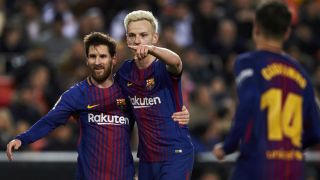 Ivan Rakitic is adamant the Copa del Rey final between Barcelona and Sevilla should be played at a neutral ground in April.

Barca booked their place in the showpiece thanks to a 3-0 aggregate win over Valencia, their progression secured with a 2-0 win in the Mestalla on Thursday.

Sevilla had already secured their passage after getting beyond Leganes, and president Jose Castro subsequently called for the final to be held at their Ramon Sanchez Pizjuan stadium.

Castro's rationale was based on Barca playing the 2015 Copa final against Athletic Bilbao at Camp Nou, but former Sevilla midfielder Rakitic says it should be held on neutral territory.

"I'm very happy to be able to play in another final," Rakitic told reporters.

"I am aware of what the Sevilla president said [about the hosting of the final] and I invite him to Barcelona if he wants.

"I love visiting my former team and a city that I love, but doing so in LaLiga is enough. In all seriousness, the best thing would be to find a neutral site that suits everyone."