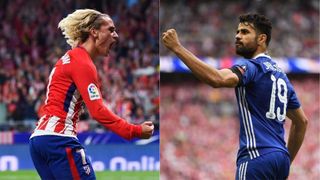 Chelsea and Atletico Madrid's confirmation that Diego Costa will return to LaLiga means a mouth-watering attacking link-up with Antoine Griezmann is only a few months away.

Costa famously fired Atleti to the top-flight title at the expense of Barcelona and Real Madrid in 2013-14 before departing to Chelsea.

The France star's dazzling displays earned him third place behind Cristiano Ronaldo and Lionel Messi in the Ballon d'Or and Best FIFA Men's Player standings in 2016.

Manchester United were heavily linked with a move for Griezmann during the close season but he decided to stay loyal to Atleti during their player registration ban.

Such speculation is likely to reignite over the coming months but, for however long the Costa-Griezmann alliance holds at Atletico, what can we expect from them as a partnership?

The prospect is one of a contrasting alliance – Costa's brute strength and imposing style alongside Griezmann's more easy-on-the-eye flourishes.

Regardless of the different means they use, both men are incredibly effective when it comes to putting the ball in the net.

During the same period, although Griezmann cannot compete in terms of medals, he is eight goals better off with 60 – the 26-year-old's return in LaLiga slightly down last term with 16, following 22 in each of the seasons immediately beforehand.

From when he joined Chelsea, only Harry Kane (77), Sergio Aguero (75), Romelu Lukaku (58) and Alexis Sanchez (53) managed to find the net more frequently in the Premier League than Costa.

The usual suspects out-performed Griezmann over this time frame, with Messi (115) and Ronaldo (108) each into three figures, while Luis Suarez scored 86 times for Barcelona. However, the world's most expensive player comes in behind the ex-Real Sociedad man. Neymar scored 59 times in LaLiga between 2014-15 and 2016-17.

Both players are adept when it comes to laying on goals for their team-mates, with Costa slightly outperforming Griezmann with 16 assists to the Frenchman's 14 over recent campaigns.

Griezmann and Costa boasted eight and seven assists last season and created 132 and 113 opportunities respectively over the period in question.

5 - Antoine Griezmann has scored against 26 of the 31 different La Liga teams that he has faced in the competition. Class. May 23, 2017

Everything points towards a fruitful partnership and Griezmann will certainly welcome having the goal burden lifted off his shoulders.

Griezmann's winner against Malaga earlier this month gives him 61 Atleti goals since the start of 2014-15.  The next most prolific players during that period are Fernando Torres (22), Yannick Carrasco (16) and Koke (13).

If Costa can scale anything like the heights he hit in 2013-14, with 27 goals in 35 appearances as Diego Simeone's men carried off their title heist, Atletico will be on to a winner with their prodigal son and current crown favourite.