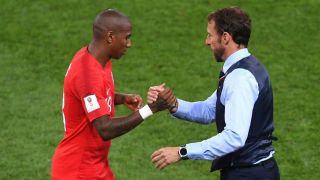 Ashley Young wants England to focus on their own qualities ahead of the World Cup semi-final against Croatia, rather than worry about the threat of Luka Modric.

Gareth Southgate's side head to Luzhniki Stadium on Wednesday for their first semi-final at football's biggest tournament since 1990, and only the second since lifting the trophy in 1966, having beaten Sweden 2-0 in the quarter-finals.

This will be England's first meeting with Croatia at a major tournament since the Euro 2004 group stage, when the Three Lions triumphed 4-2. Each side has won two of the four meetings since then, which includes England's infamous 3-2 defeat at in November 2007, which saw them miss out on a Euro 2008 spot and led to the departure of boss Steve McClaren.

Modric started that match at Wembley and remains integral to Croatia's game 11 years on, the captain having been widely hailed as one of the best players at the finals in Russia.

But Young, who turned 33 on Monday, says it would be futile to focus all their efforts on stopping Modric instead of focusing on the qualities that have brought England this far.

"They aren't in the semi-final for no reason," he told a news conference. "We've got to be prepared for them with the likes of Luka Modric in the team, who's a fantastic player.

"They've got players all around the squad that are going to be difficult opponents. We can't concentrate too much on them, we have to concentrate on ourselves and that's exactly what we will be doing going into the game."

Croatia survived two penalty shoot-outs against Denmark and hosts Russia to reach the semi-finals, the first time they have been at this stage since the famous team of 1998 finished third in France.

Midfielder Ivan Rakitic thinks the spirit that carried them through those tense knockout matches will stand them in good stead against England, who are hoping to beat two European nations at a World Cup for the first time since 1982.

"We have strength and we're united on the pitch," the Barcelona star told FIFA TV. "Like one heart, one soul. We feel proud and happy we are in the semi-finals, but we do not want to stop there.

"This is an incredible result for a small country like Croatia."

30 - Jordan Henderson has not ended on the losing side in any of his last 30 England matches (W23 D7), the longest unbeaten run of any England player in history. Fulcrum.July 8, 2018

Vida has quietly been one of the standout performers at this World Cup, and Croatia will be relieved he avoided a suspension for a rather ill-advised video published online after the win over Russia. The centre-back will be key to limiting England's threat from set-pieces and will be a useful weapon in the opposition box, too.

Henderson is expected to recover from a muscle complaint in time to start, and that could be crucial for England. Croatia's midfield control depends on the exceptional balancing act done by Luka Modric and Rakitic, and Henderson is the only player at Gareth Southgate's disposal who is well-equipped to disrupt that rhythm.

- England have not beaten two European nations in a single World Cup since 1982, when they beat Czechoslovakia and France.
- England have scored 11 goals at this year's World Cup, a joint-record along with the 11 they scored in their victorious 1966 tournament.
- Harry Kane has scored on six of the seven days of the week for England, with Wednesday the exception. Should he score, he will become just the third player to score on all seven days of the week for England, after Wayne Rooney and Frank Lampard.
- Mario Mandzukic assisted Andrej Kramaric's goal against Russia in the quarter-final – he has been involved in four goals at the World Cup finals for Croatia (3 goals, 1 assist), with only Davor Suker involved in more (6).
- Eight of England's 11 goals at the 2018 World Cup have been scored via set-pieces – since 1966, the only team to equal that number in a single World Cup tournament are Portugal in 1966 (also eight goals).
- Croatia scored two headers in their last match against Russia – only one of their previous 29 World Cup goals was scored via a header.